Japan’s truly unique culture – a stark contrast of ultra modernity with ancient traditions – make it a fascinating place to visit at any time.

But the 2019 Rugby World Cup and 2020 Tokyo Olympics have recently put Japan firmly on the world stage. Investment in entertainment, infrastructure and tourism has never been higher, and if you visit in Spring or Autumn 2020, you’ll reap the rewards.

Extremely efficient transport links mean Japan is a great place to embark on an intensive itinerary. The ‘Japan Uncovered’ overland tour, offered by our trusted travel partner Wendy Wu, is just such a trip. Want to take a peek at some of the tour highlights? Come right this way…

When to visit Japan

Tourism in Japan tends to be led by nature’s striking performances during Spring and Autumn. The Mankai (cherry blossom) season in the spring is probably the most iconic, with locals following live blossom forecasts and major urban hotels printing daily updates for guests. But the Japanese take Momiji-gari (hunting red leaves) just as seriously, and with good reason. As temperatures dip after the scorching summer, maple and ginko trees are set ablaze with vibrant reds, oranges and golds. It’s a magnificent sight which has inspired artists and poets for centuries.

Where to visit in Japan

Kyoto was the ancient capital of Japan for approximately 1,000 years until it was moved to Tokyo in 1867. Incredibly, the city was spared any wartime bombing and is still home to 2000 original Buddhist temples and Shinto shrines. As such, Kyoto is a calming antidote to fast-paced, futuristic Tokyo.

It’s here where many of the traditional wooden houses, screen paintings and perfectly raked Zen gardens of ‘Old Japan’ can be found.

The 16th century Kiyomizu Temple (‘Pure Water Temple’) is one of the most celebrated temples of Japan and houses the Jishu Shrine dedicated to the deity of love.

In Kyoto’s Gion district, geisha – professional entertainers – walk to work in the late afternoon through the streets of traditional machiya buildings. How to tell a “real” geisha from a ‘studio’ geisha or even a fellow visitor in costume? A real geisha will never stop for photos, so you’d better be quick! 5.45pm is the best time to catch them.

In nearby Nara, you’ll find significant temples and artwork dating to the 8th century, when it was Japan’s capital. But many visitors come specifically for Nara park, which is home to 1000 sacred (and famously bold) sika deer. Buy a packet of rice crackers and you’ll make new friends in no time!

Hiroshima is most famous as the site of the catastrophic 1945 atomic bombing in World War II. However, it has been safe to visit for over 71 years, and as well as the deeply moving museum sites, Hiroshima is the home of one of the most significant shrines in Japan. Itsukushima is the only shrine in the world which has a torii-gate and shrine building in the middle of the sea.

The Atomic Bomb Dome, the Cenotaph for Atomic Bomb Victims and the Hiroshima Peace Memorial Museum offer a deeper understanding of the suffering caused by nuclear weapons and the true value of peace. 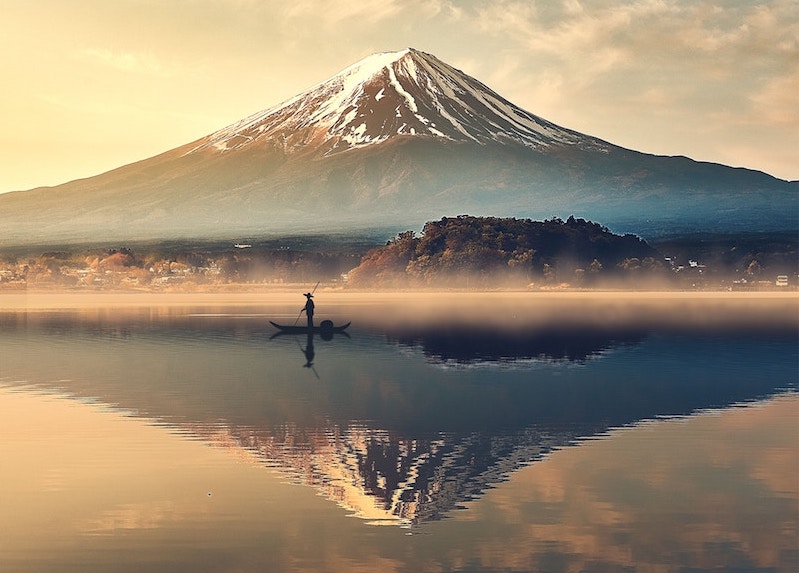 At first glance, the Kiso mountains might look like Switzerland, which is why they’re commonly named The Japanese Alps. Located in the heart of Japan between Tokyo and Kyoto and stretching to the Sea of Japan, the Japanese Alps offer traditional villages, world-class skiing and wildlife only two hours from Tokyo.

“Hell’s Valley” in the Japanese Alps does not sound like a particularly inviting place. But it’s here that the Japanese Macaques, also known as Snow Monkeys, bathe in the bubbling hot springs of Jigokudani – a truly memorable sight!

Also in this region lies the most famous mountain of all – Mount Fuji. Mount Fuji is notoriously shy and often shielded with cloud. But even if you don’t get a glimpse of the elusive snowy mountain top, the Fuji Five Lakes area is beautiful to explore by boat or on foot.

One of the world’s most cutting-edge capital cities, Tokyo is a city of contrasts: as famous for its neon-lit landscape and towering skyscrapers as its tranquil backstreets and lovingly tended gardens.

With cacophonous video arcades, bizarrely-themed restaurants and eccentric fashion subcultures to discover around every corner, Tokyo is nothing less than a feast for the senses. The only way to go is to embrace the overstimulation. Be whisked to the top of the Tokyo Skytree – the tallest tower in the world and reassuringly earthquake-resistant – and see the dazzling metropolis from the air. Cross the road in Shibuya at the famous scramble crossing where up to 3000 people cross at each change of lights.

Yet the cherished traditions of old Japan still poke through Tokyo’s contemporary canvas. The Imperial Palace grounds in Marunouchi and the Senso-ji temple in Asakusa are a must-see, while the Yanaka district  (spared any WWII bombing) is peppered with original architecture.

One can’t write about Japan without mentioning the incredibly courteous locals, who are known to go above and beyond to treat visitors, never mind the language barrier. In fact, in many ways Japan is quite similar to Britain – an island race, with slightly odd idiosyncratic tendencies and very reserved. Perhaps that’s why cannot resist Japan’s mysterious yet tantalising charms…

Feeling inspired? We’d be delighted to help you plan your 2020 trip to Japan alongside our trusted partner Wendy Wu Tours.

Japan Uncovered escorted group tours start at £6,790pp and run March-May and September-November 2020. But hurry, most dates are selling out fast.

Give us a call

Speak to one of our dedicated travel consultants today.

Fill in our online form and one of our consultants will be in touch.

Download our free 2019 edition of Traveltalk for inspiration for your next trip away.

We use cookies to ensure you get the best experience possible.

This website uses cookies so that we can provide you with the best user experience possible. Cookie information is stored in your browser and performs functions such as recognising you when you return to our website and helping our team to understand which sections of the website you find most interesting and useful.

Strictly Necessary Cookie should be enabled at all times so that we can save your preferences for cookie settings.

If you disable this cookie, we will not be able to save your preferences. This means that every time you visit this website you will need to enable or disable cookies again.